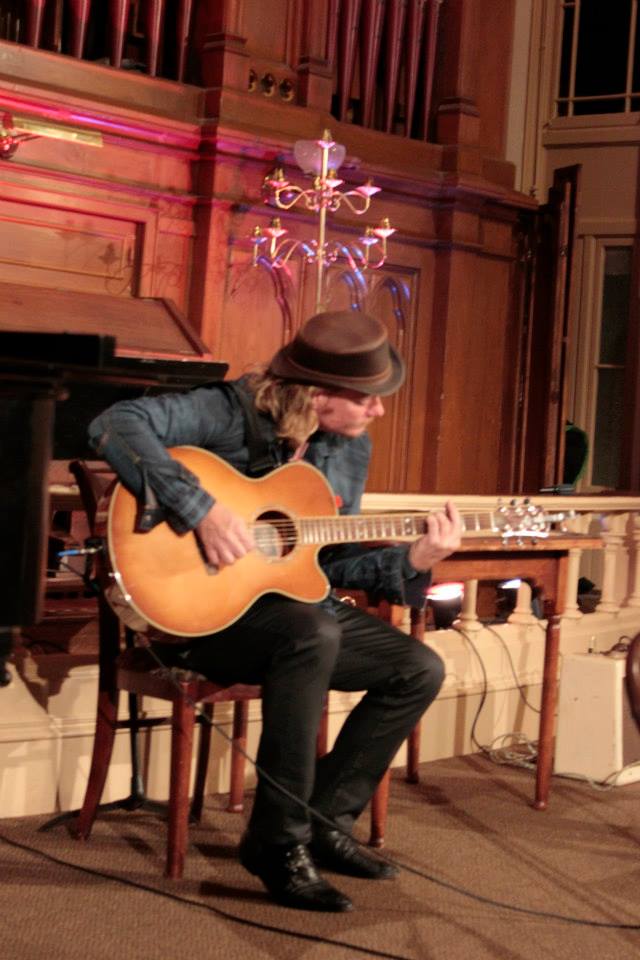 Jim Camacho knows the value of persistence. Indeed, he’s reaped its rewards from both a faithful following and ongoing critical acclaim. With a vibrant solo career that spans more than a decade, one that remains in full flourish, he continues to make music that’s dynamic, distinctive and consistently engaging. His latest single, “Going on Faith,” a collaboration with Nashville songwriter Kris Bergness that was produced by John Carter Cash, testifies to his optimism, tenacity and sheer determination to overcome whatever obstacles life may toss in the way.

“I’m grateful to be able to make music,” Camacho says. “It’s been quite a journey and sometimes that journey is as unexpected as the music that’s made along the way. When you say yes to a certain situation, it brings other opportunities as well.”

A respected songwriter, musician, producer, playwright, actor and sound designer, Camacho’s continuing accomplishments were originally spawned by the Goods, a band that set the high standard he’s maintained ever since. The group released five exceptional albums, beginning with Play RIP Music in 1989 and progressing through Too True To Be Good (1991), 5 Steps To Getting Signed (1992) and Mint (1995), before making their major bow with Good Things Are Coming in 1998. The latter found them working with the late legendary producer Tom Dowd, the man behind the boards for such legendary artists as Rod Stewart, Eric Clapton, Cream, the Allman Brothers and Lynyrd Skynyrd. It not only yielded a hit single courtesy of the irrepressible “I’m Not Average,” but also accrued Album of the Year honors from the Florida Jammy Awards. It ultimately allowed the band to share stages with such high profile headliners as Pearl Jam, the Smithereens, Cracker, and Matthew Sweet. However, their accolades didn’t end there. The Goods found themselves featured in a VH1 documentary, an honor which provided them with a lingering legacy for years to come.

While the Goods failed to climb to higher heights, Camacho didn’t let their demise stop him from securing success all on his own. That’s evident not only in the four solo albums he’s released — Trouble Doll (2001), Hey Hey* (2003), Stalker Songs (2005), and Beachfront Defeat (2009) — as well as his various EPs (Is It Me, Everywhere, and Adventures in Songwriting) but also in the various kudos he’s reaped as well. They include numerous honors from South Florida’s New Times, which cited him for Best Acoustic Performer (2005), Best Album (2009) and inclusion among the top albums of the year in 2013.

Other accolades include feature placement in such prominent film and television soundtracks as the Grammy-nominated documentary “Tom Dowd & The Language of Music,” National Lampoon’s “Pledge This,” the television series “Pretty Little Liars,” and a documentary titled “Fatboy,” the latter of which garnered a nomination for “Best Use of Music in a Documentary” at the Sundance Film Festival.

These successes come as little surprise. Camacho’s always been known for creating music that allows for immediate accessibility, thanks to a combination of resolute refrains, arched anthemic melodies and a purely poetic song style. Miami New Times once said of him “his ability to craft “enjoyable, accessible tunes does not come at the expense of astute and poignant lyricism.”   They were right.

That’s another reason why his efforts have extended to other arenas as well. His theatrical endeavors began with his original production “Fools’ Paradise,” which featured the direction & choreography of Jonathan Cerullo, a veteran of Broadway, film and television. The production was successfully launched in Miami before achieving sold out workshops in New York City. His other musical works include “Mickey Herman Saves the $#&@ World” a collaboration with playwright Marco Ramirez which premiered at Miami’s Adrienne Arsht Center, his original children productions, “The Cavie Islanders and the Troll,” “The Guru of Gir,” and “Digging for Bones,” which were greatly received as well. In addition, he’s enjoyed a rewarding collaboration with famed puppeteer, television host and Disney and Jim Henson associate Noel MacNeal, thanks to a number of collaborative musical productions, some of which have become seasonal installations at the Bronx Zoo. They include “Who Put the Trick in Trick or Treat: Tales of Amazing Tricksters,” “Beasts of the Magical World,” “The Carnival of Extraordinary Animals,” and “Mouse King,” the latter of which is now seen as a much-anticipated South Florida holiday tradition.

He’s also applied his skills to acting, taking leading roles in the Mad Cat Theatre Company performance of “RPM” and in the film “Father of Mine”.

It’s little wonder that others have called on Camacho’s musical skills as well. He’s written or co-written several songs for various artists, including the chart-topping “Blank Page” for Johnny Reid,” One More Night” as recorded by Jason Mortin and the Chesapeake Songs, “Renegade Rose” for Ana Cristina Cash,” Love’s Out the Window” for ILO, two songs, ”Brooklyn Bridge” and “Life,” for Alex Di Leo, and “Party Down the Road” for Chloe Lang. He’s also shared his services onstage, touring with Alicia Keys, John Legend and folk legend Linda Perhacs, in addition to serving as musical director for the internationally known singer, pianist and guitarist Zascha Moktan. At the same time, he’s performed at some of the most prestigious venues in America, including the Mirage Hotel in Las Vegas, New York’s Radio City Music Hall, the Kodak Theater in Los Angeles, not to mention theaters up and down the West Coast and throughout the U.K.

Over the past decade, Camacho has continued to display his prolific prowess, thanks to a series of singles that include “Ophelia,” “Please Come Home,” and “Make It to the Morning Light.” He’s also indulged in various one-off projects, including recordings with the band Hail Mary, a collaborative effort that also features singer/songwriter Jodi Marr and his brother and former Goods bandmate John Camacho.

Notably, Camacho’s prolific prowess extends to spotlighting other artists as well. His YouTube series “Adventures in Songwriting,” initiated last year, finds him working with a series of special guests and then writing a song with them in tandem within the program’s 30 minute timeframe. The songs were recently released as an EP that includes collaborations between Camacho and such seminal South Florida talents as Fernando Perdomo, Charlie Pickett, Elsten Torres, Rob Elba, and the bands Ex-Norwegian and Deaf Poets. The Miami Herald’s Howard Cohen described the special release show as “Good fun and a testament to the power of inspired songwriting.” He couldn’t. Be more accurate in his assessment.
Even now, Camacho is clearly committed to continuing to maintaining that high bar. “I’m eternally grateful to all the people I’ve been able to work with and for all the music I’ve been able to create,” he reflects. “I’m still excited about whatever the future brings.”